This is a sign that is part of a group of three Wherigos (GC7TTW6, GC7ZNWZ, GC7ZNWF) I published in Gilbert, Arizona, all within the same vibrant block of bars, music and shopping. This was originally published on my Vintage Neon Signs blog.

Vintage Neon Signs...and Why We Should Save Them 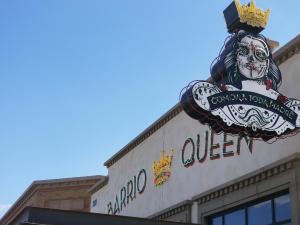 Barrio Queen makes its own corn tortillas from fresh masa delivered to the restaurant daily. Between tacos, enchiladas and sides for entrees, Barrio Queen serves an average of 11,000 tortillas per week.

The celebrated Cochinita Pibil (“little pig”), which pays homage to Mayan cooking, is traditionally cooked for hours underground and wrapped in banana leaves. Here, it’s cooked for 14 hours before being topped with pickled onions and salsa Yucateca, and served with fresh corn tortillas.

The secret to the famous guacamole is fresh pomegranate seeds, when in season. An average of 700 orders of guacamole are served each week.

Barrio Queen serves an average of 1,100 pounds of pork per week and carries 21 types of street tacos.